Unsteady simulations : how does it work ?

The extension of intelligent mesh to unsteady simulations is not straightforward and must be undertaken with care to keep  a reasonable computational efficiency. In this context, the adapted mesh is expected to follow time-evolving phenomena. Each mesh controls the space-time numerical errors while the solution evolves during the associated time sub-interval. This leads to N striped-shape anisotropically adapted meshes guaranteeing the control of space-time errors during the whole simulation.

Explosion in front of the Capitole (left) and explosion in a city (right) : anisotropic surface mesh.

A level-set function is used to represent the interface between water and air. The mesh is adapted on this function to accurately capture the interface and all its topological details. During the simulation, the number of nodes is evolving (it’s a variable, not a fixed data), and reaches a maximum at t=0.5s -1 million nodes – whereas the mean number of mesh nodes during the overall calculation time is only about 200 000. The same simulation, performed with “usual” numerical methods (low order) and structured fixed grids would have required more than 70 million nodes ! Say it, unrealistic. 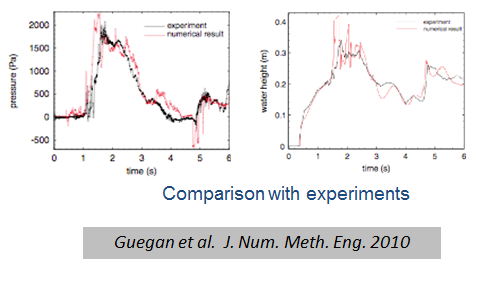 Side view of the dam break problem.
View of the free-surface from inside the tank.

While performing unsteady simulations within moving objects, mesh elements can be localy highly stretched and distorded. In order to avoid this situation and ensure high precision and robustness during the simulation, LEMMA is providing new modern methods, based on “swapping edge” and “auto-repaired” mesh technologies. No need to remesh manually ! Both methods are derived in order to handle efficiently shear movement.